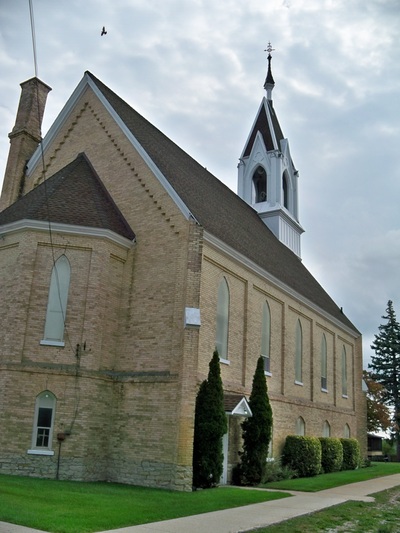 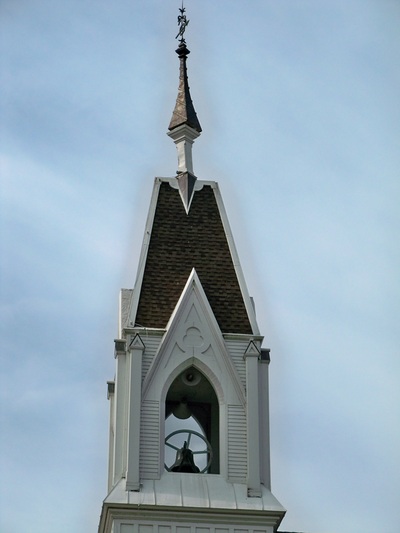 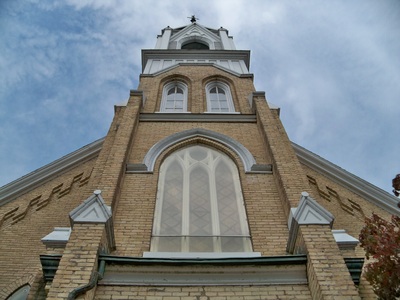 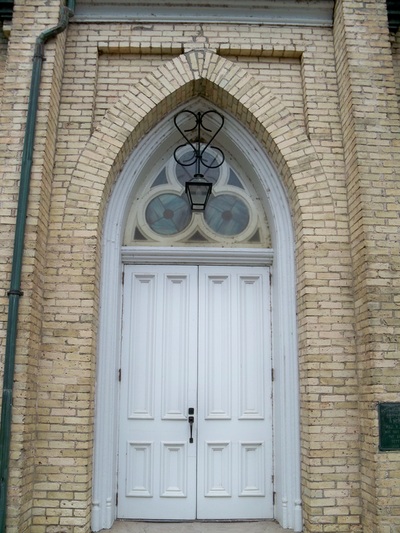 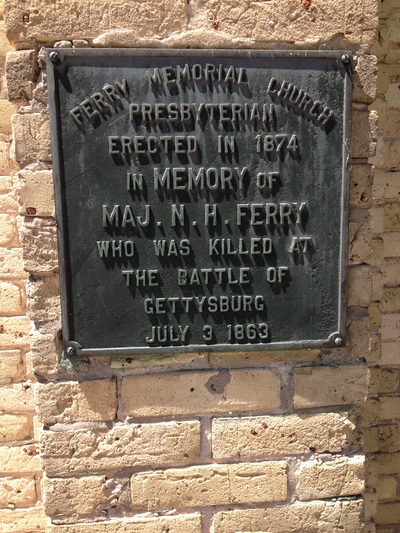 ﻿﻿﻿The oldest church edifice in the White Lake area is our brick sanctuary, now known as Heritage Hall, erected in 1874 in memory of Major Noah H. Ferry, who died in the Civil War battle at Gettysburg, Pennsylvania on July 3, 1863.

Noah H. Ferry, the son of Rev. William Montague and Amanda Ferry, was born on Mackinac Island, April 30, 1831. The family moved to Grand Haven in 1834, and in 1854, Noah and his brother Edward took over the family's lumber mill in White River Township. They prospered and gave much to the community, including building the first schoolhouse in the area in 1856.

When the Civil War broke out, Noah became the captain of a 102 men company known as the "White River Guard." In early 1863, he became a Major. He was killed in battle against Robert E. Lee's forces at Gettysburg.

When Noah died, his property reverted to his father. In March 1866, Rev. Ferry built the Red Lumber Mill on his son's property. At the same time, Rev. Ferry loaned money to Mr. E. R. Burrows to erect a two-story building at the corner of Dowling and Ferry Streets, with the stipulation that the second story be used for church services rent-free.

Thus began the First Presbyterian Church of Montague in 1868. Unfortunately, Burrow's Hall burned down in 1871.

At that time, Edward Ferry, Noah's brother, told church officials that his mother, who died in 1870, had left a bequest of $1500 toward the construction of a church in Montague, to be supervised by Edward and Mr. George Dowling. Edward then offered to pay for the entire construction of the church building, as a memorial to his deceased brother Noah. The building (which cost $12,000 to finish) and a parsonage were constructed on two lots donated by Edward. The buildings were finished in 1874, but finally dedicated on January 9, 1877.

For many years a thriving church, membership plunged in the 1930's, and the church dissolved by 1942. A number of Reformed Church in America people had regularly attended Ferry Presbyterian Church while summering in the area. Thus, when the Presbyterian Church closed, a group of Reformed folk decided to form a new congregation in the area. The Presbyterians gladly leased the building to them for five years, with an understanding that if the congregation thrived, the property would be deeded to them for $1.

Someone observing the upward rise of the old sanctuary steeple, contrasted with the new sanctuary roof lines sloping down toward the earth, remarked: "It looks like Ferry Memorial is reaching up to God; and reaching out to people." That became our church's vision statement. 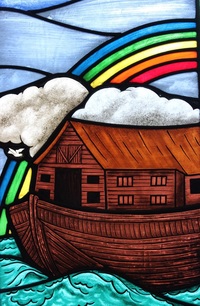 A neighboring house in ill repair was purchased and removed to create more parking. Flowers and plants have been added to beautify the parking lot. A memorial garden has been dedicated, where engraved bricks are added by request.

During the summer of 2002, the steeple of the older sanctuary, built in 1874, was in need of major exterior repairs. Thus arose the "People for the Steeple." Approximately $100,000 in major repairs, including the steeple, roofs, windows, retucking the rock base of the old sanctuary, etc. were accomplished. Fundraising efforts included a community auction which raised over $13,000, and gained media attention in Muskegon, Grand Rapids and Ann Arbor. 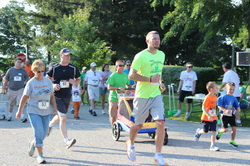 A stainless steel full-size anchor was handcrafted by Mr. Wayne Vogel in memory of his friend, Rev. Lloyd Arnoldink. It was dedicated on September 1, 2002 during worship. "The Anchor Holds" became the church's theme for the year, emphasizing that in the sometimes smooth, sometimes turbulent seas of life, Christ is our steady security and hope.

On September 21, 2008 we gathered to celebrated 138 years as a church on this site, 70 of those years as a Reformed Church in America congregation. praise God for his many blessings and share stories of the founding of Ferry Church. We worshiped, enjoyed special music, and viewed a special documentary video of the church. Refreshments and great conversation followed.

In 2015 and 2016, we retucked the brickwork on the old sanctuary and repainted the steeple.  In 2015 we held a "People for the Steeple" 5K fun run to raise money for repairs for the old church.